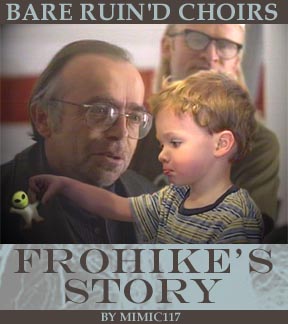 Who'da thunk it? Old wild man Frohike on diaper duty. Well... this is the little Scully-Mulder, after all. Soon to be just Mulder. Hey, big guy, settle down. Daddy's busy trying not to dirty his own diaper right now. Can't say I blame him. I'd be jumpy, too, waiting for a woman like Scully. A great day, huh Willy-boy?

Mulder and Scully's wedding day. I just can't believe it. 'Course, I can't believe a lot of things that have happened lately. Damn, I wish Byers were here. He'd get such a kick out of seeing Mulder all sweaty and nervous. It's been ten months and still no word. Either he found Susanne Modeski and hasn't been able to get back to DC, or... I don't even wanna think about it. Let's think about something more cheerful, Will. Like how much fun it is watching your old man sweat bullets. What's he got to be nervous about, huh? A beautiful woman who loves him, a terrific little kid, and me to keep him in line. Nope not a care in the world.

I heard Scully's brother say this is a stupid time to be getting married. But what time would be better? Why not celebrate life while we can? I can see Scully didn't get her personality from Bill Jr. Of course, he just doesn't understand how fleeting life can be, does he, Will? He's never been to 'Nam and seen how someone can be alive and vital one minute, and so much worm meat the next. If only I'd been there, ya know? If I'd been able to protect her the way a man should protect the one he loves, I could have had a day like this, too. Well, it would have been a peasant wedding, but I would have been married to the woman I loved. I could have brought her back with me, her and our baby. Just think -- if they were here, I could have a grandson about your age for you to play with, Willy-boy. Maybe we would have had lots of kids and grandkids by now. She was such a shining star. So loyal, and fierce, and brave. I saw her stand up to soldiers almost twice her size when they hassled the old people and children in her village. She didn't take shit from no one, amigo. I'll bet that's what happened in the end. I never did hear the whole story, but I'd be willing to bet good money on it. Loyal and brave to a fault, she was. Absolutely refused to go someplace safer when things started to heat up in the region. Said she wasn't gonna leave the old folks to fend for themselves. She probably went marching out there, looking to pick a fight over how they were treating the villagers. Some stupid green-assed fucker probably thought she was hiding a bomb under her shirt. My child -- a bomb. How idiotic is that? He just shot her down in the street. Killed her without any reason or question. I didn't hear about it for two weeks, you know. Two weeks when I still thought she was alive and waiting for me, and they were already cold and buried. No one would tell me who it was, Will. To this day I still don't know. God damned military bullshit. All they would say was "accidental shooting under suspicion of collusion." What the hell is that supposed to mean? She never colluded with nobody but me -- between the sheets. Bureaucratic government asshole motherfu...

Sorry, Willy-boy. Didn't mean to cry on you. No, old Frohike's okay now. Thanks for the kisses, big guy. Makes me feel a lot better. Let's just keep all the bad words to ourselves, shall we? No need to be spouting those off in the middle of the service, okay? Your mom is one scary lady when she gets her Irish up, and I think that would do it real fast. So mum's the word, right, hombre?

Wonder what's holding up the festivities? We should have gotten this show on the road about fifteen minutes ago. Wait'll you see your mom in her wedding dress, Willy-boy. Looks like an angel with a halo of fire, she does. Oh, that's right -- we were both there when she picked it out, weren't we? 'Course, you were too busy hiding from old Frohike in the dress racks to notice how she looked, but I noticed just fine. I hope you don't take this the wrong way, big guy, but your mom is hot. It was a long time after 'Nam before I looked at another woman, but as soon as I saw Dana Scully, I said "She's hot!" And I meant it in the most complimentary way, too. There's just something about a female who knows her own mind and isn't afraid to go after what she wants. She's got enough cojones for an entire Marine platoon. But when I saw her earlier today, she was all woman. I think I fell in love with her all over again, right there in the hall, as she handed you to me with that one eyebrow raised. "I hope you know what you've gotten yourself into," she says, "but I really do appreciate this, Frohike. We never would have made it this far without you."

Yeah, I'm gettin' a little misty-eyed again. Sorry, Willy. Your mom just has that effect on me sometimes. Watching you, while she's buying a dress or getting married or any other time, is the least of the things I'd do for her. I hope she knows that. I know your dad does. He feels the same way about her. The difference is, that's the way she feels about him, too. Hell, I don't know how many times they've pulled each others' nuts out of the fire. He even went all the way to Antarctica to bring her back. I'd do the same if she'd let me, but I know what my place is. I'm content to do what I can whenever I'm needed. Somebody's gotta play Sancho Panza when your old man starts tilting at windmills. Scully's his Dulcinea, so I guess I'll just keep being Sancho. I seem to be made for the part.

Considering what Langly's got to look forward to, I think I got the better deal taking care of you, Will. Whatever possessed Mulder to ask him to do a reading? He's liable to get three chapters of Hitchhiker's Guide to the Galaxy instead of the Good Book. At least Langly had the sense to wear a suit. Well, after I tore that Def Leppard T-shirt off him, anyway. Sure does look uncomfortable in it, but his hair's clean and neatly ponytailed for a change. We should be thankful for small miracles, shouldn't we?

Speaking of miracles, if something doesn't happen soon, you're not the only one who's gonna need fresh britches, Willy-boy. I think your old man is about to lose a load from the strain. I don't think I've ever seen him with this big a case of the heebie-jeebies. It's not the good padre's fault, either. He'd be a comfort to your mom, but your dad is a real independent cuss. Can't seem to bring himself to trust in a higher power. Don't suppose he's had the best track record getting his prayers answered. That kind of thing can make you pretty bitter in the long run. But he's a good man, Will. Don't you ever doubt it. A redwood among mere sprouts. I told your mom that once when we both thought he'd bit the big one. Thank God we were wrong. I'd hate to think of a world without Mulder in it to drive us all crazy.

Look at him up there, Will. His love shines so bright it's blinding. I guess I don't mind losing out with your mom if it's your dad she wants. They belong together. Besides, if you were *my* kid, you'd never have a chance at a basketball scholarship. Better to have the old man you've got, huh? Yeah, that's what I think, too. And you'll have lots of stories to tell the other kids about how your dad whupped ET's ass, right, Willy-boy? Damn straight, amigo.

Fists thrust into his pants pockets, Mulder repeatedly rises onto his toes to scan the back of the church. “If he’s a no show, Father, I’m gonna whip his a--” He stops himself and gives McCue an apologetic glance. “Sorry, Father. It’s just...I should’ve asked someone else.”

“Give him time, Fox. This isn’t easy for him.” McCue stands confident, hands clasped loosely behind his back. “He’ll show.”

“I envy your faith.”

“There’s no trick to it. When you want to believe, the rest follows, don’t you agree?”

“Yyyyes, but...” Mulder looks again at the empty church door; his frown returns.

McCue is aware that Fox Mulder and Bill Scully, Jr. have struck an uneasy truce. Mulder extended an olive branch when he asked his future brother-in-law to stand as his best man. Not thrilled with the idea, Bill Jr. had not immediately accepted. McCue guessed that a little family pressure encouraged him to agree in the end, although now it looks as if Bill might be having second thoughts. The ceremony was scheduled to start more than twenty minutes ago. The guests are getting restless and Mulder has begun pacing small circles in front of the altar.

Mulder suddenly stops, his eyes round with panic.

“I’m not so sure.” Mulder catches Langly’s attention and draws him to the front of the church with a waggle of two fingers.

“Yo, dude, whassup with your best man?”

Langly’s expression becomes serious. “You want me to stand in? I--”

“It appears we’re about to start,” McCue interrupts, pointing down the aisle.