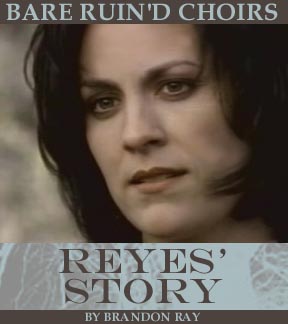 It’s the first day of spring, and the whales are dying.

Try as I might, I can’t get those two thoughts out of my head. Not even on this day of days.

We heard about the whales last night, just before the rehearsal. More accurately, *I* heard about the whales. The news arrived at the command center by messenger, as so many reports do these days. The experts say it will be at least another year before the ionosphere settles down enough to make long range radio transmissions dependable again. Thank God none of the bombs were detonated over inhabited areas ....

But the whales -- the whales have been discovered to be susceptible to the alien virus. It just takes longer to run its course in them than it does in humans. And so now ... now that we've won, after paying such a terrible, terrible price... now that victory is finally ours ... the whales are dying. And there’s nothing we can do to stop it.

There will be no vaccine for the whales. There isn’t even enough for all the humans who need it, nor do we have the resources to engineer a variant that would work on cetaceans. Even in our small group -- one of the nodes that played such a vital role in winning the ultimate victory -- there are those who do not qualify. Little Will is too young, and Mrs. Scully and Father McCue are too old, and the rules are very, very strict, and rigidly enforced. Mulder and Dana, of course, refused treatment, saying that their doses should go to others more in need, and relying on their own previous exposures to the virus to keep them safe.

So there will be no vaccine for the whales. There can’t be, and I understand that, and I agree with the reasoning that leads to that conclusion. I helped write the damned rules, after all. But it still hurts.

I haven’t shared the news with anyone. Not yet. I didn’t have the heart -- not on Mulder and Dana’s wedding day. They deserve a little happiness, after all the sorrow we've all been through. After their honeymoon -- all 48 hours of it, locked in their apartment together, alone, while Mrs. Scully takes care of Will -- is soon enough. There’s so much work still to be done, and so little time for joy.

I force my attention back to the service. Mulder and Dana are entitled to that much, at least. Hell, they’re entitled to so much more than that, but it’s all I’ve got to give at the moment. Langly’s speaking now, and from the expressions on some of the faces around the room, I don’t think his words would make much sense to me even if I *had* been paying attention.

Which actually doesn’t matter -- not in the least. What’s important is that he’s their friend, and he’s here to witness their love. His eloquence -- or lack of it -- is beside the point.

I shake my head, and automatically reach for a cigarette -- but then quickly withdraw my hand. No smoking in the church, of course. Nor is tobacco as easy to come by anymore -- although I admit I was touched when Frohike, of all people, brought me several cartons of Marlboros after his last inspection tour. I guess rank does have *some* privileges.

But not here. Not now. Looking for a distraction, I turn my gaze on little Will, bouncing restlessly on Frohike’s lap. He’s such a cute kid, and his presence in our group has helped remind us all of what we’re really fighting for -- the future.  As always, I feel myself calming as I look at him, and in my mind’s eye, I can see him as a grown man, tall and strong and proud.

I haven’t had much opportunity to spend time with Will -- not with things being as they are. But I still have a major soft spot for the little guy. I delivered him, after all, and I was almost as terrified as Dana when the replicants gathered around, waiting for ... something ... to happen. Still, it all worked out, and in the end, Dana -- and Mulder -- were gifted with a beautiful baby boy.

But even here, my imagination begins to betray me. Yes, I can see Will as a grown man, but this particular grown man will be a soldier. That is already preordained, and has been since the moment the Invaders struck. We’ve beaten them back, yes; we've killed as many as we could, and driven the rest of them off this planet. But we have no means to pursue them, no way to destroy them utterly, and so we must assume that they might come back someday.

We will have to remain vigilant; we will have to watch for their return, our eyes lifted to the sky in fear rather than the awe and wonder that once was our birthright. We dare not lower our guard, even for an instant. And that means that our young men and women will have to give some of themselves in service of the greater good. There’s no use pretending that it can be otherwise.

I wish John were here. I wish I were even sure that he was still alive. Part of me -- the professional part, the part that managed to survive more than a year of brutal guerilla warfare against alien Invaders -- understands that he must surely be dead. If he were still alive, he and his team would have contacted us by now, but they have not. Some humans did escape from New Haven on that last, horrible day, but John and his people -- Tom Colton, Kim Cook, and all the others -- were not among them.

At least we know they completed their mission. If they hadn’t, none of us would be here today.

But then there’s the other part of me -- the part that knows things without knowing how I know them. And *that* part is sure that somehow, somewhere, some way, John Doggett is still alive. It’s irrational; there are no facts to back it up. Nevertheless, that still soft voice whispers, deep inside my soul -- it’s true.

On one level, of course, I already know the answer. He would be happy for her. He would happy for *them*. He was -- is -- a generous man, and a true gentleman, and that's such a rare commodity these days. If he were here, he’d be smiling, gracious and friendly. He’d shake Mulder’s hand, he'd kiss Dana on the cheek, and all of it would be completely and totally sincere, because he really would be feeling those things.

But down inside he'd be hurting. I know John. I know him better, perhaps, than anyone but Patricia, his ex-wife. And the first time I saw him with Dana, I knew where his feelings lay. I could see it in his eyes and in the set of his shoulders. I could hear it in his voice when he spoke to her. Hell, I could feel it radiating off him in waves whenever she entered the room.

He was in love with her.

I could also tell how she felt, and it was obvious that John knew, as well. Dana has room for only one man in her life, and it was perfectly clear who that man was. Even after we found Mulder’s body, that didn't change. I made two trips to Washington during the three months that he was dead, and both times Dana was completely closed off, emotionally speaking. No one could get close to her. Not John, not Skinner -- not even Frohike. And they all tried. They wanted to be there for her, in whatever capacity they could. But she would not allow it.

And then suddenly Mulder was alive again, and everything changed once more. When I came back to D.C. for the Dukes case, I saw immediately that Dana’s universe had reoriented itself, and I would have had to have been blind not to see who was at the center. I’m sure John saw it, too -- hell, he knew her better than I did at that point. He must have been expecting it. But that wouldn’t have made it hurt any less.

But John was bigger than that, I remind myself. He was quite possibly the best man I’ve ever known. I’m sure he would have felt the pain of seeing somebody he cared for turning to someone else, but he would have overcome it. In the end, his pleasure -- no, his *joy* -- at their mutual happiness would have won out. Yes, that’s how it would have been.

“Dana and Fox,” -- McCue looks from Scully to Mulder -- “you have come together in this church so that the Lord may seal and strengthen your love in the presence of the Church’s minister and this community. Christ abundantly blesses your love. He has already consecrated you in baptism and now he enriches and strengthens you by a special sacrament so that you may assume the duties of marriage in mutual and lasting fidelity. And so, in the presence of the Church, I ask you to state your intentions.”

The congregation rises to its feet. Skinner’s jaw sets and he straightens his shoulders. Maggie’s eyes glisten with unshed tears. Reyes smiles from the second row, as does Langly.  Frohike holds William high in his arms so the boy can see his mother and father when they answer McCue’s questions and make their promises.

“Fox, Dana, have you come here freely and without reservation to give yourself to each other in marriage?”

“Will you love and honor each other as husband and wife for the rest of your lives?”

“Will you accept children lovingly from God and bring them up according to the law of Christ and His Church?”

Mulder looks past Scully to William. The boy’s face is solemn, his eyes wide and blue, and he looks so much like Scully that, for a moment, Mulder cannot speak.

“I will,” Scully agrees.

“Since it is your intention to enter into this marriage, join your right hands, and declare your consent before God and His Church.”