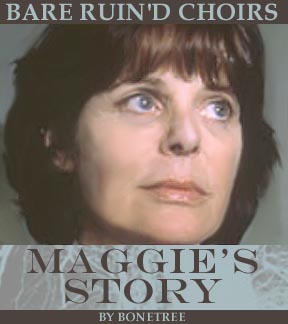 Holding Will’s hand, I can remember a time when it was only the sound of his laughter, the laughter of a child who knows nothing of danger, that sustained me. The dark months of waiting, watching the news every night. Of wondering about Dana and Fox and what would become of them.

Sometimes I would go into Will’s room at night and just watch him lying there and think: If we have this, we can go on. I know that’s what Dana thought every time she looked at her son. It was, at times, the only thing to look on with that pure a hope.

Sitting in St. John’s, I remember the other thing that has sustained me through the darkness. It is all around me, built with brick and mortar and the small eyes of stained glass scattered here and there. My faith. In God. In my family. And in myself.

It wasn’t that I thought I wouldn't see this day come. Here in the pew before the altar, the situation feels more familiar than strange to me. Fox at the front, his eyes on the end of the aisle. Father McCue standing in the center as he has always done, the center of this period of my life that has been a terrible gyre. Bill standing there, looking for all the world like his father when he was young -- dignified and doing what is for him, I know, a hard duty.

I was hard on him as we came up the aisle, I know. I've always had to be hard on him where Fox is concerned, where Dana is concerned. He’s always been so protective of her, but he’s let that drift into trying to make her decisions for her, or judging what she does decide for herself. I can’t bear that today. Not when this decision is so right for her.

I turn and face the back, releasing Will’s hand, who seems content to sit in Melvin’s lap now, calm for a moment as the time draws nearer. It’s almost like even he can sense that something important is about to happen here, and he’s quieter than he was.

It’s the same feeling that fell over me as I stood behind Dana in one of the anterooms, placing the veil on her head, letting the fine white mesh settle over her face. We were both looking at her in the partial mirror on the wall, the dress utterly flattering.

I was surprised when she said she wanted a wedding dress for this. For some reason I’d always pictured her in a suit, when I pictured her marrying at all. For a while even that was hard to imagine. Before Will, when her career and the seemingly easy, unspoken connection with Fox had dominated her life. Vows to something other than that life she’d led with him seemed far away then.

Her blind devotion to him and to her duty had been over her face like a veil then, partially obscuring things I knew she needed to see. Like her own need for a commitment to something she could believe in, to something permanent. That something was Fox, always right before her and beside her. It took Will to show her that, though for a time she looked at him through that gauzy haze, as well.

It took the past months to truly lift it away, to make her believe what was in front of her own eyes all this time, to show it to her clearly. She sees it now.

It makes me smile to think of that.

I smiled as I lowered the veil over her face again, looking at her face in the mirror through it. She looked somehow new, a shy smile coming from her. I told her the one thing her father never could say to her outright, what I hope he could say today. What he *would* say today, given all that she's done.

That I was proud of her. And that I loved her.

I turn back to the altar, looking at Fox and Bill standing there, Father McCue quiet between them.

There was a time when I heard much talk in my family that it was Fox who caused Melissa to be lost, who caused Dana’s illness and the dangers she’d faced in her life. And I’m ashamed to say that for a time some dim part of me believed it, despite myself.

But now I look at Fox and I know that he also brought her -- and all of us -- to this place, this time, and this moment.

I am proud of him for that, as well. And I love him, too.

Too bad about St. John’s old pipe organ, McCue thinks as he waits for Scully to make her entrance. Nothing sounded better at a wedding. But the pipe organ no longer plays due to water damage from the recent fire. And there is no organist in any case. Frannie O’Donnel died more than six months ago. McCue recalls the heartfelt manner in which she used to play Bach’s “My Heart Ever Faithful.” Never a dry eye in the congregation. Including his own.

With no organ or organist, McCue had asked Mulder and Scully if they would care for recorded music during the ceremony.

“Something to keep tempo, Dana, while you’re marching down the aisle.”

“Too gloomy,” Mulder said. “How about ‘Blue Suede Shoes’?”

“What kind of wedding doesn’t have Elvis?”

“The kind that takes place outside of Las Vegas.”

McCue had steepled his fingers and smiled. “Perhaps we can come back to the question of music,” he said. “Dana, have you given any thought as to who will walk you down the aisle?”

“My first thought was Bill, of course.” She plucked at an invisible speck of dust on her sleeve.

“There’s someone else...someone who stood beside me during the darkest time of my life...when Mulder...when...” She closed her eyes and swallowed old sorrow. McCue knew she referred to Fox Mulder’s disappearance, his presumed death and then his subsequent return to life. A true miracle, proof of God’s power and His attention to prayer. Scully’s eyes reopened, wet with tears. “Walter Skinner risked his reputation and his life for me. For both of us.”

“Pulled my dead ass from an early grave. If it hadn’t been for old Walt, I’d be pushing up daisies right now instead of watching Will blow out birthday candles.”

Scully reached for Mulder’s hand and locked her fingers with his. “It would honor us both if Walter walked with me on our wedding day.”

An easy decision. Easier than the question of music.

Waiting for the procession to begin, McCue sways a little to the rhythm of “Love Me Tender.” Abruptly the music changes. Handel’s “Allegro Maestoso” filters through the church and the guests’ heads crane to see the bride at the far end of the aisle.

Dana Scully appears, more nervous than McCue has ever seen her. Veiled and gowned, she grips Walter Skinner’s arm and locks eyes with Mulder at the opposite end of the church. Conversely, the groom relaxes at the sight of her. He stops his restless rocking, stills his fidgety limbs and waits patiently for Skinner to bring Scully to him.

As for Skinner, he is beaming.