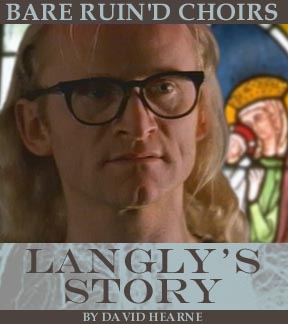 I open my mouth to say, "Will the Lord cast off for ever? And will he be favorable no more?" In the back of my mind, I hear Lemmy Kilmister growl, "Two thousand years of misery, of torture in my name/ Hypocrisy made paramount, paranoia the law/ My name is called religion, sadistic sacred whore."

Ol' Lemmy's dad was a minister. Mine was a farmer. We both got religion from our fathers. Neither of us cared for what we got.

I was one of those people who used to look up during church prayer, and watch all the other people with their eyes closed and heads bowed. I would think, "What a bunch of slaves. Do any of you see God here? I only see that smug bastard of a preacher -- the guy who sneers at us if we move an inch from where he wants us to stay. If I hear him talk about the dangers of feminism and gays one more time, I'll puke into the collection plate." One of the best things about leaving home was not having to go to church anymore.

I wasn't the only one to feel this way in my little barren section of Oklahoma. I would meet fellow young outsiders who were as tired of small-town piety as I was. A lot of them struck me as being pretty dumb, though. First of all, there were the Satanists. You know, the whole black-clothes, black-hair, black-fingernail-polish crowd. The people who know the words of Aleister Crowley by heart, all that wannabe medieval crap. To me, this bunch was little different than the actors pretending to be knights at the Renaissance Fair.

I even knew a few young Buddhists. They were always going on about how Buddhism was a religion of infinite compassion and so on. I wish I could meet them now. I want to ask them about the Dalai Lama being a paid agent of the CIA and a homophobe. (Wonder what Richard "gerbil-up-the-wazoo" Gere would think about that?)

That's one of the advantages of being an atheist, I guess. You get to piss on everybody's beliefs. When I was young, I wasn't interested in finding a new god.

I wanted to be one.

I first got a taste of being God when I began playing Dungeon Master for a local D&D competition. (And for your information, D&D is waaaaay different than a Renaissance Festival.) I was able to create this whole world with nothing more than pen, paper, dice and my own imagination. It was a great feeling, and I wanted to keep it going.

That's what brought me to computers. When I first laid hands on a keyboard, and the screen of an IBM monitor lit up before my eyes, it was like coming home. This is where I will rule, I thought. This is where a sarcastic farm-boy who hates his church and will never make the football team can build his own realm.

It didn't quite happen that way. I remember mouthing off to my dad about how computers were the future of the world. I was right, but I seriously overestimated my part in it. I wasn't going to be Bill Gates. I was going to be the guy who hangs around at computer conventions and helps people get free cable. There would be no empires with my name.

So I figured -- if I can't have my own empire, then I can nibble at what other people have. No longer would I be a king. I would be a freedom-loving anarchist with the Dead Kennedys and Minor Threat roaring in the background. I would not be God, but a demon breaking into your security system and snatching all your best secrets.

Yeah, well, that was the idea. Guys like me are big on talking about anarchy. We love playing those video games where you're this heavily-armed dude shooting up monsters in a post-apocalyptic environment. Bring out the nukes, we cheer. Let's end all this bullshit once and for all. Tear down society and let's party.

The real thing wasn't as fun as a video game.

Recent events haven't changed my philosophy too much. I still don't believe in God -- at least not one that has any particular interest in what we do on planet Earth. However, here I am reading from the Book of Psalms.

"'Hear my voice, O God, in my prayer; preserve my life from fear of the enemy. Hide me from the secret counsel of the wicked...'"

Psalms are always good for a quote. My little speech starts out well with that. However, as I go along, I discover that I'm making a mess out of things. I'm rambling all over the place as I bounce from one literary reference to another.

I spent a lot of time researching this speech for nifty quotes. I didn't just take stuff from the Bible. I sniffed through Shakespeare, Donne, Plato, all the big names. I spent hours on internet libraries searching for high-minded words on love and honor and the rest of that cool crap. (They have just recently managed to get some of the Internet back on line.) And the thing is -- I've never read this stuff before. My poet laureates were Joe Strummer, Joey Ramone, Lou Reed and Johnny Rotten. I was just looking up Shakespeare because I needed something a little more classy than "I Wanna Be Sedated." Much to my surprise, though, I found out that these dead old poets and philosophers were *good* -- far better than what my boring high school teachers led me to imagine.

But I guess I should have spent a little more time on shaping all my research together into something manageable. That's the clear message I'm getting from the other people in the church. The priest is doing his best to stay appreciative. He reminds me of a Sunday school-teacher I had. Miss Holly would *always* consider what her students did to be wonderful.

Frohike isn't being so patient. He keeps squirming on the pew, bouncing lil' William in his lap. Every roll of his eyes makes me realize that I'm screwing up.

The looks on the other peoples' faces aren't much better. The Skinman has that quiet look of displeasure, which always unnerves me. That pretty new chick who has been working on the X-Files -- Monica what's-her-name -- is looking at her fingernails. Scully's mom is trying too hard to look attentive.

As for the bride and groom, they're giving me the kind of looks people give to dogs when they're acting silly. You indulge them because you feel affectionate to them.

God, I wish that Byers was here. He should be the one delivering this speech. Why did he have to go and run off?

Because of Susanne. Because he had to find someone he cared about.

Well, I cared about you, man. You were the most uptight guy I ever met, but you had guts. You stood up for what was right. The Lone Gunmen wouldn't have gotten anywhere without you. So why did you have to run out on your friends like that?

And I love the people here.

Maybe that's what I should be saying now.

I fold up the shuffled papers, hold my hands behind my back and say, "Look...what we're doing now doesn't seem important. I mean, compared to everything else that's been going on, what's a wedding?

"Not to say this hasn't been a long time coming. I mean, we used to take bets down at the Lone Gunmen about when you two were going to get married. We had a pool and everything."

"Who won the pool?" Mulder asks with a smile.

I look at Frohike. He appears as uncomfortable as I feel. That gives Mulder and everybody else the answer. For a moment, it seems like a good idea to just sit down and shut up.

Then I take off my glasses and rub my eyes. "Man, it's tough," I mutter, then put my glasses back on. "You shouldn't have to deal with everything else on a day like this. We took those bets for a reason. We knew that you two would be perfect for each other. I still think that.

"Is that enough, though? Against everything else, does the happiness of two people matter? Seriously, does it?"

They all look at me for an answer. Weird. Why should I have to answer a question like that?

Because it's my job right now. So I search for a honest reply.

It takes me close to a minute. And this time, they're all paying attention.

"Well...it's not just Mulder and Scully's happiness at stake. It's mine. And Frohike's. And little Will over there. Not to mention Mrs. Scully and Father McCue and Reese--"

"Oh, yeah, Reyes. Sorry. What about you, Skinner? Do you want this wedding to happen?"

"More than anything else," he says in his blunt, Marine-style voice.

"Then...what more do we need? It's not going to change the world, but...for everybody here...it's the biggest deal of all. That should be enough for anybody."

I look straight at Mulder and Scully. "We want you to be happy, guys. Because you've earned it. Because the world is better with you two in it."

Mulder looks surprised and flattered at the same time. I guess that I'm not the kind of guy who normally says such things.

Scully mouths the words "Thank you" to me. I nod back, then sigh, "That's it."

I pass Frohike on my way back to my seat. "Nice save, hippie," he tells me.

The priest waits for Langly to take his seat before launching into the homily. His Bible remains closed. This part of the ceremony flows from his heart.

“The mystery of Christian marriage, the dignity that wedded love holds, the grace of the sacrament and the responsibilities that married people possess -- these are common themes to discuss at a wedding. Because we find ourselves living in uncommon times, however, let us view the subjects of family, duty and love in a broader context today.” McCue’s face is set with a tender smile. He cares a great deal for this particular congregation. They have endured hardship, each in their own way, but perhaps none have sacrificed so much as this bride and groom.

“For a long time world events have conspired against Dana and Fox, necessitating a postponement of ‘normal’ family life in order for them to serve a more altruistic purpose.”

Sadness momentarily shadows the couple’s eyes, and McCue sees in their expressions a hint of the pain they have suffered. Today’s joy does not compensate their losses. Time away from loved ones cannot be reclaimed. Lost lives cannot be resurrected -- not on this side of Heaven.

“Fox and Dana are proof that ‘love is patient,’” McCue says, quoting from the thirteenth chapter of 1 Corinthians -- appropriate scripture to describe the bond between Fox Mulder and Dana Scully. “‘Love bears all things, believes all things, hopes all things, endures all things.’”

The congregation nods. Sitting beside Langly, Monica Reyes’ eyes are bright with tears. She doesn’t search her pockets or her purse for a tissue, but lets her tears fall.