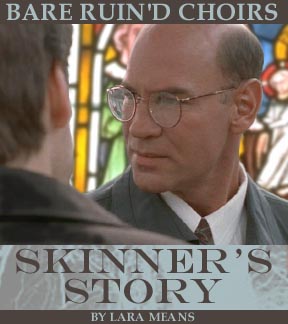 I don't remember ever seeing her nervous. Anxious, afraid, worried -- but not nervous. She shouldn't be nervous. It's only her wedding day. She's been in far more dangerous, tenuous situations.

Professionally, anyway -- not personally. Personally... I don't think anyone could have gone through the things Dana Scully has and come out as strong as she is. In her case, that old saying "what doesn't kill you makes you stronger" definitely applies. She's the strongest person I know. She should be able to handle getting married without being nervous.

I watch Mrs. Scully adjust the veil one last time, squeeze her daughter's hands, then grab her son by the arm. Bill Scully shoots me a scathing look before his mother drags him into the chapel with her. But I don't deserve his scorn. It's his own fault he's not walking his sister down the aisle.

When they asked me to dinner a few weeks ago, I had no idea what they were planning. I knew about the wedding, of course, and I was happy for them. If any two people deserve some measure of happiness, it's them. I did feel a little pang of jealousy, though.

Not like he does, of course. No one could love her like Mulder. But almost every man she knows loves her. I remember hearing that Agent Pendrell had a huge crush on her, and Mulder told me that Frohike's been smitten since the day they met. But I think I'm the only one who knows how John Doggett felt, because I saw it happen. I watched him fall for her while Mulder was missing, saw how alone he was when Mulder came back and she didn't need him as much anymore.

I know how he felt. I felt the same way.

I tried to maintain our friendship after William was born, but I knew neither of them needed me. All they needed was each other. Then, when all hell broke loose and we were working together again, the three of us became closer -- in my mind, anyway. I never really knew how close to me they felt, not until they asked me to dinner that night, and asked me to do this.

Dinner was relaxed and friendly. I felt comfortable, at home, with them. I'd brought an old bottle of wine I'd kept hidden, and Mulder produced a set of crystal goblets that had belonged to his mother. After dinner we played with Will -- who, unfortunately, has taken to calling me "Unca Wally" -- until his bedtime. Then the grownups adjourned to the living room for coffee, and I began to feel uneasy with them for the first time in a very long while. I was pretty sure they hadn't asked me to dinner for old times' sake, so I decided to take the bull by the horns. "Any particular reason you two asked me over tonight?"

They shared a look, and I could swear that an entire conversation took place within that look. Then they joined hands and turned back to me.

"Walter," Mulder said, "we want to ask you something."

"Something we'd like you to do for us," she added.

I said nothing, just looked at them as I did a thousand times when they were my agents reporting to me. They shared another quick glance, Mulder nodded to her, and she took a deep breath.

"We want you to walk me down the aisle at the wedding."

Nothing -- not Mulder's crazy theories, not Scully's eventual belief in them, not my own experiences -- could've prepared me for that. I looked from her to him and back again, almost too surprised for words.

Finally I stammered out, "I think it might be more appropriate for one of your brothers to give you away..."

Scully laughed quietly. "Well, first of all, that isn't exactly what the job is." I frowned, confused. "We don't feel that anyone needs to 'give' me to Mulder."

"We've belonged to each other for a very long time," he added, so softly it seemed he was speaking only to her. She heard him, acknowledged him with a tiny squeeze of her hand, then went on.

"We wanted someone who could understand that. Bill... Bill hasn't exactly been supportive." Mulder chuckled at that, and I remembered the first time I met Scully's brother -- when she almost died of cancer. He was very protective of her, and openly hostile toward Mulder, so I could see why he wouldn't be their first choice.

"You have another brother, don't you?" I asked.

"Charlie," she almost whispered. "Charlie..." She trailed off, looking to Mulder. He slipped an arm around her and turned to me.

"Charlie's MIA." She leaned against his shoulder as he told me, squeezing her eyes shut.

I didn't say anything for a few minutes. I caught his eyes and nodded, waiting as he comforted her. The loss still seemed fresh, raw.

"That's why we want you," Mulder told me. "You know us, Walter. What we've been through. You've been through it with us, almost from the beginning, and --"

I held her hand for a moment, considering what they'd just said. I understood them, knew what they've been through, and they considered me their friend. That was something I didn't know for certain, not until that moment.

Then she smiled at me. Her smiles are precious, not given lightly or often.

She squeezed my hand and smiled. How could I say no?

And right now, today, that's the least I can do for her.

She's pacing tiny circles here in the vestibule, fidgeting, trying to burn off her restless energy -- not an easy task in a wedding gown. I walk up to her and take her hands in mine, give them a gentle squeeze. It calms her -- for the moment, anyway.

"No," she says emphatically. "No, this is right. It's the first thing that's felt right in a very long time." She shakes her head. "I'm about to marry the love of my life, the father of my child... and I can't stop my hands from shaking."

I open my hands to look at hers. "They're not shaking now."

That gets me a small grin, along with a slightly arched eyebrow. "No, they're not."

"Well, then..." I reach for the table behind her, where a single red rose lies. It's the only flower she wanted to carry. I give it to her, wrapping her fingers around the stem. "If they start shaking, you just hold onto me."

Her smile broadens, and her eyes are shining. She nods, then reaches up and puts her arms around my neck. "Thank you," she whispers.

I pull her closer, careful not to dislodge her veil. "That's what friends are for."

We stand that way through the last verse of "Love Me Tender," then Elvis gives way to Handel and I release her.

She takes a deep breath, then nods once. "Yes."

With both her hands grasping my arm, the rose clutched between her fingers, we step toward the chapel entrance. She squeezes my arm and looks up at me.

"Walter... you are our dearest friend."

I can't help the smile that comes over me as we begin our walk down the aisle. I look at Mulder, waiting for her. And I know that no matter how many of us love her... he's the one she loves.

Skinner, pleased as punch, escorts Scully to the front of the church. Arm linked with hers, he takes measured steps, not hurrying their walk down the aisle.

Scully’s gown trails behind her. She carries a rose; its crimson color echoes the blush of her cheeks and the red of her nervous smile, visible beneath her veil. When she finally stands beside Mulder, she releases Skinner’s arm and lifts her veil. Her face is pale and her hands shake a bit, which seems to amuse Mulder. His smile disappears, however, when Skinner leans close and whispers, “Mess this up, Mulder, and I’ll kick your butt but good.”

Mulder nods, and Skinner moves to the front pew where he sits beside Maggie. William has crawled into his grandmother’s lap for the moment.

Further down the pew, Frohike wipes away tears, seemingly unembarrassed that he is so affected by the sight of Scully in her gown. He accepts a tissue from Maggie and loudly blows his nose.

Father McCue clears his throat, drawing the congregation’s attention. “Welcome, Dana, Fox, family and guests,” he says,  “Let us begin with a prayer.”

There is a shuffle of feet as the congregation rises.

“Father, hear our prayers for Dana and Fox, who today are uniting in marriage before Your altar. Give them Your blessing, and strengthen their love for each other. Keep in our hearts all the many dear ones who are unable to attend but who are with us in Spirit. Amen.”

“Please, be seated,” McCue invites. “Today we gather together in the presence of God and this company to join Fox William Mulder and Dana Katherine Scully in the holy bonds of matrimony. Marriage is an institution ordained by God. There is no tie on earth so binding and none so sacred as that which binds men and women in matrimony. Such a relationship should not be entered into thoughtlessly, insincerely or indiscreetly, but advisedly, thoughtfully, and in commitment to our Lord.” McCue turns to Langly in the second row. “Mr. Langly, if you’re ready, let’s proceed with the Readings.”

Langly pops up from his seat and makes his way to the front of the church, a handful of papers dangling from his fist. At the podium, he takes a moment to shuffle his notes. Unsatisfied, he reshuffles them.

“Cool your jets.” Langly rearranges his papers one final time. “It’s not like we’re hacking into a DOD classified network node here. Some things can’t be rushed.”